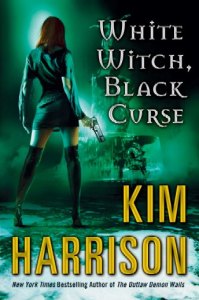 The read-a-long over at — Goodreads — has moved up to WHITE WITCH BLACK CURSE, and to mark it, Harper has okayed a short-lived price reduction for the e-book. Take advantage of it! It won’t last long, and it’s a nice way to round out your e-library and give your paperbacks a rest. 😉 At the moment, both The Outlaw Demon Wails and White Witch, Black Curse are on sale for 1.99 Links below.

Because this is a publisher-sponsored price reduction, it is unfortunately for U.S. only.

If you’re just now hearing about the read-a-long, the folders for the earlier titles will remain active, so come on over! We’re getting closer to AMERICAN DEMONS release, but there’s still time to binge-read the series!

A-a-a-and, Nicola’s has opened up their pre-orders for AMERICAN DEMON!  If you’re looking for a signed/personalized book, here’s where you can get it. International orders are A-ok. Just email them first from the order page. Let me know who you want it personalized to in the comment’s section at Nicola’s order page. 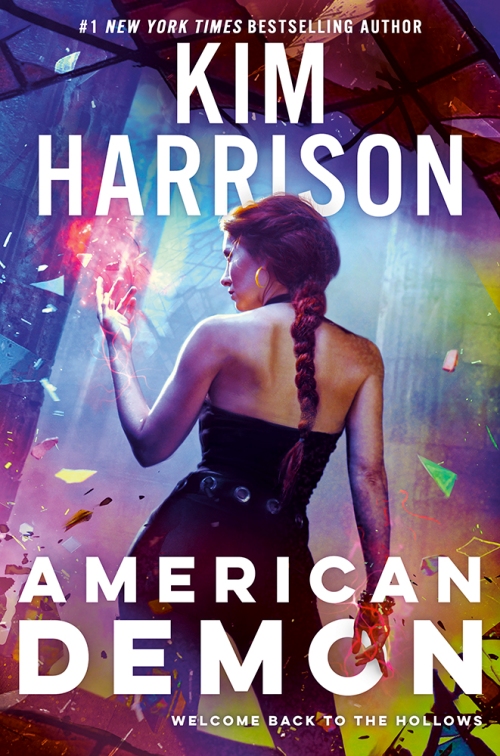 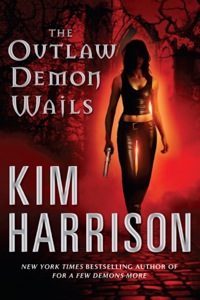 The read-a-long over at — Goodreads — has moved up to THE OUTLAW DEMON WAILS, and to mark it, Harper has okayed a short-lived price reduction for the e-book. Take advantage of it! It won’t last long, and it’s a nice way to round out your e-library and give your paperbacks a rest. 😉

Because this is a publisher-sponsored price reduction, it is unfortunately for U.S. only.

If you’re just now hearing about the read-a-long, the folders for the earlier titles will remain active, so come on over! The conversation has been lagging because of the holidays, but don’t let that stop you. Outlaw Demo Wails is one of my favorites.

Also, if you haven’t seen it, we have a cover for the upcoming AMERICAN DEMON, which is the next installment of the Rachel/Trent drama. I absolute love it, and I hope you do, too.

For A Few Demons More-Read-a-long/price drop 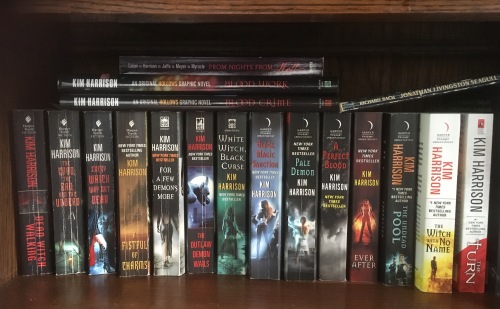 If you haven’t heard, I am sponsoring a read-a-long over at Goodreads. Today we officially start FOR A FEW DEMONS MORE, and if you want to join in, come on over!  — Goodreads –!

Even better, there’s a rolling price reduction going on, even if you are not a member of Goodreads. So if you can’t find your books or simply want to round out your e-library, this is a relatively painless way to do it. Or even better, get a book for that stubborn reader in your life who just won’t give the Hollows a try. 😉 For A Few Demons More is 1.99 for a short time, and because this is a publisher-sponsored price reduction, it is unfortunately for U.S. only.

If you’re just now hearing about the read-a-long, the folders for the earlier titles will remain active.

EVERY WHICH WAY BUT DEAD : KINDLE

EVERY WHICH WAY BUT DEAD : NOOK

Also, I worked with my publisher at ACE to offer you early, presale buyers, a stunning card for AMERICAN DEMON that you an print out and put under the tree. Just click the image to go to the bigger copy for your own use. And happy holidays! 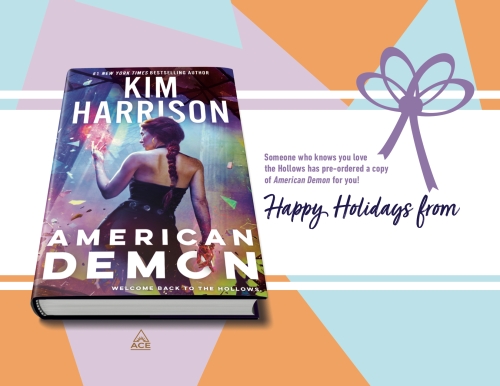 Got a favorite Hollows quote? Have a burning question? Guess what? I’m hosting a Hollows read-a-long!

To celebrate (and get ready for) the release of AMERICAN DEMON in June, I’m hosting a read-a-long where you can gush, and laugh, and cry, and commiserate with like minded readers of the Hollows. I’ll also have information on flash sales as they come up, (fingers crossed) and who knows, I might just have a give-away or two.

We’re starting Dead Witch Walking TODAY! And though we’re taking some time for this first one to help get organized and find a large group, I plan on burning through the series pretty quickly. (If you want a slower read-a-long, there’s another going at The Cincy Underground over on FB.)

I’m structuring this to have one or two sharp breaking points per book where you can talk without the spoiler tags, but I’m counting on you all to start discussions and topics as we go. I have no idea what you want to talk about, so jump in and take part. I’ve always been proud of the way my readers can discuss without arguing, and I’m looking forward to talking with you and hearing your thoughts. 🙂

Not a member of Goodreads yet? You’re in for a treat! Sign-up is easy, and it’s an amazing place to find new reads and friends who appreciate reading what you do. Why Goodreads? They have a great setup to structure read-a-longs on, so check it out. Everyone there loves books. Everyone.

Also, I’m still looking for some moderators. I’m hoping to have 13 with the intent being that each book have a designated head moderator who will chaperon the read-a-long with me for the duration of their book, giving the other 12 moderators a bit of a break. (Though obviously, if you’re a moderator, you’re able to moderate through the entire read-a-long.)  So far, we have Joseph for A FISTFUL OF CHARMS, Liz H. for WHITE WITCH, BALCK CURSE, and Karen for PALE DEMON. (Thank you so much, Joseph, Liz, and Karen!)

If you are interested, please let me know at Goodreads at the introduction thread. I’ll be looking for you there!

Quick heads up! I’m sponsoring a Hollows read-along over on Goodreads starting next month and running to the release of AMERICAN DEMON on June 16, 2020. And because I know not everyone is on Goodreads, I’ll be answering questions here as well but in a much more haphazard format and not as cozy.

Come back on Monday for Goodreads links and the schedule of what we’re reading when, but because there are so many to get through, it’s going to be a book every two to three weeks with a few weeks off in December.

If you want to get a head start, we’re starting at the beginning with Dead Witch Walking.

And on the fifth day of plotting…

If I’m quiet, I’m working. 🙂 And I’ve been quiet! I should have a release date for AMERICAN DEMON for you soon But what’s on my desk is THE RULE. (followup to AMERICAN DEMON) Yep, I’m in full cry, chasing the next Hollows story. A reader recently asked about my plotting process, which has become fairly stable by now, though I admit that every book is built using different tools depending upon how much new magic/new characters/difficult themes/new techniques it has. But rather than tell you how I plot using AMERICA DEMON or THE RULE, and give away a lot of spoilers. (Pike. OMG. Pike.) I dipped back into my files and found a few posts from 2009 that pretty much encompass the process. You can go back a few posts from here to get to the first nitty gritty of how it starts, but today, I’m going to share a post where I’m at about day five in my plotting process. (In a new world/series, this would be about day ten.)

About the only difference between then and now is that I’ve begun using index cards with one sentence plot movement to help me place where certain information becomes known: the red herrings, actual clues to solving the crime, or knowledge of how to build the spell. I’ll have a stack maybe an inch thick when I’m done, divided up by chapters, which I then use to help me structure the one-page chapter synopses.  It helps when I’ve got two or more plot lines going because I can easily move realizations, discoveries, and new-skill attainment around before anything goes on paper.

So here is my original post from 2009, as I worked up THE OUTLAW DEMON WAILS.  I’ve got one more post to share after this concerning my plotting methods, but as always, everyone writes differently, and what works for me might not work for you. Just keep trying things. The only wrong way to write, is to not do it. Oh, and my chapter synopses always change when I begin writing. Always. If they didn’t, I’d get bored. Gotta follow the story where it leads!

It’s about day five of the plotting/outlining stage of the next Hollows book, and I’ve got my 13 page synopsis broken into ten chapters so far.  Hopefully I’ll finish the chapter breakdown today, and can start on the actual writing tomorrow.  (whoo-hoo!  I’ve got to catch up with you guys doing the NaNoWriMo!)

So far, while using my character grid, I’ve found that I’ve got a slow spot, and I moved some things around to quicken it up.  I also named a new character, learned a few things about him, and Rachel has told me she likes him better than the guy I thought she’d be interested in.  He kind of likes her, too, or maybe he just likes the way she makes him feel.  (Be smart, Rachel.)  I’ve also learned what the story is about besides solving the crime and settling the love interest.  (By the way, it’s not settled.)  What I’m talking about here is the character growth, I suppose.  And without character growth, not only would the story be stale, but I’d be bored to tears writing it.

So today, I know what inner demon Rachel is going to slay this book–or at least come to terms with, and can work it in even at this early stage.  Previous demons?  Trust, adrenaline, her sexuality, independence.   That I’ve realized it this soon is good.  Sometimes I don’t see it until the end of the book, which goes to prove that I’m still learning my craft.  Thank all that is holy.

I’ve been shunning my social obligations lately because, well, how many pictures of birds and plants can you take? But I’ve been busy. Very busy–keeping my mouth shut. 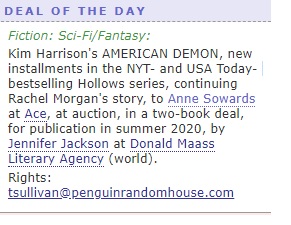 It’s shut no more. After spending a nice chunk of time cleansing my writing palette and playing with a few new-to-me writing techniques, I’m officially back writing the Hollows. AMERICAN DEMON, the next Rachel and Trent book that follows right after THE WITCH WITH NO NAME–has  found a home, and a rough publishing date.

I am tickled to be back working with Anne Sowards at ACE, which is where and who I got my start with the Truth and Princess series.  I couldn’t be more pleased.

You guys are going to love this.